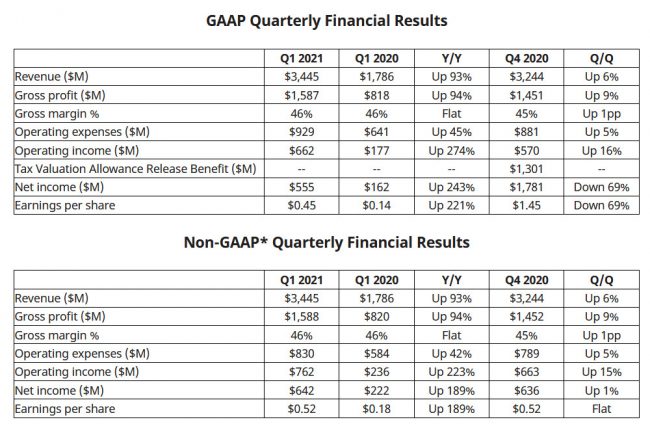 Current Outlook
AMD’s outlook statements are based on current expectations. The following statements are forward-looking and actual results could differ materially depending on market conditions and the factors set forth under „Cautionary Statement“ below.

For the second quarter of 2021, AMD expects revenue to be approximately $3.6 billion, plus or minus $100 million, an increase of approximately 86 percent year-over-year and 4 percent quarter-over-quarter. The year-over-year increase is expected to be driven by growth in all businesses. The quarter-over-quarter increase is expected to be primarily driven by growth in data center and gaming. AMD expects non-GAAP gross margin to be approximately 47 percent in the second quarter of 2021.

For the full year 2021, AMD now expects revenue growth of approximately 50 percent over 2020 driven by growth in all businesses, up from prior guidance of approximately 37 percent annual growth.